of the Edition !_think out-of-the-box_!

taken from the volume III of

The Tri_logical Dissection of the Lobbycratic Era
— “‘I do not agree!’ —
Politico-economic Readings about the Neo_Wilhelmo-liberalism and its Consequences.

(__This volume III of The Tri_logical Dissection of the Lobbycratic Era,
as volume 7 of the „Edition !_think out-of-the-box_!“,
is scheduled to be published in the first half of 2020.__)

What is wrong with the EU?

Well, the socio-political situation in the EU is as follows:

On the one side there is an elite that identifies itself with the lobbycratic EU and that, to a certain extent, has its effect way down into the European peoples through so-called non-governmental organisations. But this way you cannot bind the mass of the people to the lobbycratic EU, in fact, this is only possible through force. Projects like the German agenda 2010, whose implementation leads to trim the mass of the people in line with the market, so that, in the end they can’t help but function in the sense of this ideological guideline of the EU, thus in the sense of the EU ideology. This has nothing to do with democracy but all with lobbycracy. — Consequently, the question arises: How dare anyone call this a democracy when, in fact, all it is is a veritable lobbycracy?

Reading Nine gives you a deep insight into
the socio-political direction that
becomes apparent in the EU.

Reading Nine was published in September 2018. 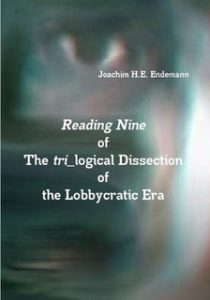 can be purchased with Lulu.com  here: