We shouldn’t overreact to terrorism, especially not as this terrorism is home-made, thus a reaction to the false politics by the western world.
Even though this statement is not to be understood as any kind of justification for terrorism, of course, isn’t it strange that first terrorism is generated, which you have to fight then? What about the politics responsible for it? Shouldn’t that be changed at first? 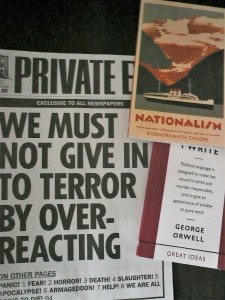